Amsterdam – we welcome you in the most famous city of The Netherlands. Enjoy it’s beauty together with one of our beautiful Amsterdam escort&massage girls. The beautiful city of Amsterdam started it’s history on the last part of 12th century, from a small fishing village. Until the 17th century it developed in one of the most important ports in the world. The 20th century is the period of the full expansion of our city, leading to one of the most European capitals.

A big flood in the year 1170 made the people to built a big bridge over the Amstel and a dam to keep the water away from their small village, called then Aemstelredamme. The year 1327 comes with the new name Aemsterdam. The 14th century is the period of transition from a small fishing village to a prosper city. From the year 1345 is the also the first mention of the famous shopping place, the Kalverstraat. The 16th century comes with the Eighty Years war, which will come with the Dutch independency. The 17th century is also know as the Golden Age of The Netherlands, where Amsterdam would be the wealthiest city in the world. The Dutch West&East India companies, will acquire new territories over the seas, better knows as the Dutch colonies. Let’s not forget about the oldest stocks exchange in the world, which dates back in 1602 The 18th and 19th centuries were not the best period for the prosperity of Amsterdam.

Napoleon’s wars lowered the importance of the capital, thing which will end around 1815, when the kingdom appeared. The end of this period, is also knows as the second Golden Age, when the city developed to what we have today. The Netherlands was neutral in the First World War, but it was affected by a heavy hunger of the population. 10 May 1940 is the moment the Germans are invading our country. This comes also with the famous story of Anne Frank, which today has it’s own museum in the house where she was hiding. After years of continuously development and expansion, in 1977 the first metro will work in Amsterdam.

The geography of Amsterdam

With two meters below the sea level, Amsterdam is located in the West of the country, being also the home of a man made forest, Amsterdamse Bos. Through the North Sea Canal, the boats can go to the North Sea.

90 islands, 1200 bridges and more than 100 kilometers of canals are waiting for you to visit them. One of our well-educated girls, can tell you more information over the “Venice of the North”. Please excuse our clumsy way of telling you about the history of our beautiful city. We can’t compete with the more suitable people from museums, which will let you know everything you want to know about Amsterdam. 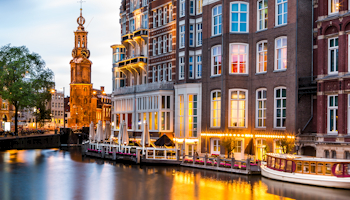 Amsterdam is by far, the most famous city of The Netherlands. Known for it’s free mentality and open-minded people, our capital attracts yearly over 15 million tourists, eager to see with their own eyes, if the heard stories are true.

Even though the official government is located in The Hague, Amsterdam is the start point for the most social and cultural events. The variety of local attraction, will satisfy all the tastes and the big number of fun places, will make your time in Amsterdam unforgettable.

We are specialized in Hotel Massage and Hotel Massage services and our performance satisfies the highest expectations. For special moments, we provide high-class massage girls, for the most affordable massage prices in this area. Call us on +31(0)6-11387899 for info. You can also book escort online on our website.